Animals:  In the Arctic Tundra there are many animals that survive and thrive despite the cold and harsh climate.  Most people believe that the tundra does not have food and it is show covered and barren.  Not so.

The Polar bear are the most recognised animal of the Tundra.  Here are a few adaptations that make them suitable to this biome:  They have long stiff hair in between their feet that provide them traction.  This also protects their feet from the cold. Their hair usually shakes free any water or ice from by swimming. These bears also have hollow fur, which traps air inside thus for making the bear buoyant. Their small rounded ears prevents water from entering the bears ear.  This protects them from freezing water inside their ear and ear drum. They have a thick layer of fat which keeps them warm in the winters and it is up to 11cm thick. The skin under fur is black and this is for better heat retention. This thick lush white fur also gives them protection as they camouflage well with snow. 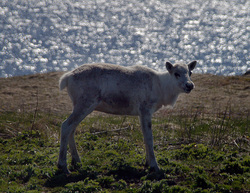 The Caribou are also a thriving animal in the Tundra.  Here are a few adaptations that make them suitable to this biome:  In the winter the fleshy pads of their hoofs shrink and the hair between their toes covers the pads to keep the caribou warm.  Probably the biggest adaptation, caribou are one of the few animals that are adapted to feed on lichens.  They have a large stomach that digests lichens.  The outside hair is hollow and this does two things; it acts as a insulating layer to conserve body heat and allows them buoyancy when swimming.  Their coat fades to light beige as a camouflage against predators. 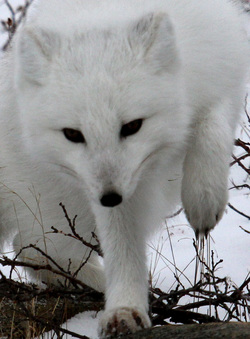 Arctic fox is one of the cutest animals in the tundra.  Here are a few adaptations that make them suitable to this biome: They have short heavily furred, rounded ears (to protect from the cold).   This limits the escape of body heat from the fox.   Their coat changes color (in the summer the fur is reddish brown to act as a camouflage,  and in the winter it turns white to blend into the snowy environment.  It develops a layer of insulating fat to keep warm.  They have a phenomenal breeding rate.  They are able to remain active during temperatures of around -50 degrees celcus thus for making it possible to function and survive in extreme circumstances. 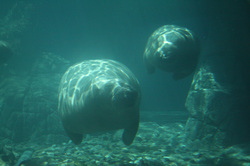 The Walrus is not an attractive animal, but it is sure tasty for Polar Bears!  Living in the Ocean, they have developed some adaptations that make them suitable to this biome:  The walrus is able to survive in the harsh climate of the north pole because they have a layer of blubber that can be up to 6 inces thick to keep the body heat at a steady temperature.  They usually live in shallow waters and feed on mollusks.  They are able to dive 100m and can stay underwater for 30 minutes at a time.   Their rear flippers are adapted for swimming in the water but can also rotate and help walk while on land. Their Large tusks are also key to the survival of the Walrus and are used for defense. 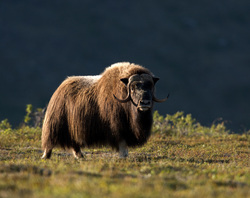 The Muskox are a puzzle of nature.  They look like a throwback from ancient times.  Their uniqueness is probably why they have adapted to survive in this most harsh climate.   Here are a few adaptations that make them suitable to this biome: The Muskox's hooves are breaking ice so the oxen can drink water when most the water is frozen.  They have thick fur, much like all Arctic animals, to keep them warm.  Their eyes can see in bright lights or in the dark.  Of course, their unique horns are great for warding off predators.  Their under-hair is ten times more warm than Sheep because the fiber of their hair is super insulating.